The Anti-Black racism when it comes to Muslim Marriage 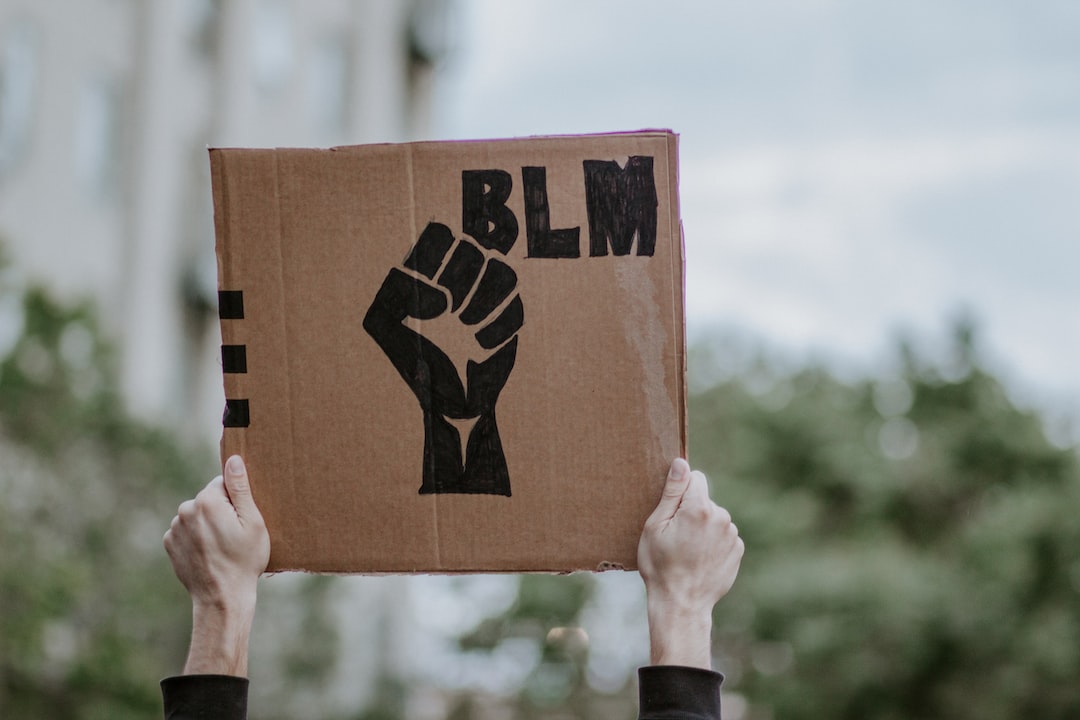 Let's not beat around the bush - as a British Muslim of Pakistani origin, I know first hand that both Asians and Arabs can be incredibly racist towards their own kind, however unashamedly more so towards those who are Black.

Let’s first acknowledge - this conversation is happening far too late.

Reflecting on the current situation in the US, Black communities have faced hundreds of years of structural and societal discrimination, racism and oppression. There are definitely wider issues at play here. However, as Muslims, particularly those Muslims who aren’t Black, we must reflect on our own attitudes, conduct, and contribution to the mindset some of us have towards those of colour.

However this argument is a little simplistic and naive. Islam is perfection and comes from Allah. Our practise of it is imperfect.

For those who are Arab or South Asian (myself) I’m sure we have all witnessed anti-Black racism from our family members and friends. Perhaps we have even been party to such chatter.

Never mind anti Black sentiments - we’ve equally been infected by the white is right mindset and the preference towards lighter skin. We are quick to even discriminate against those who are from a different “village back home”, or bring ideas of caste into the equation. I’ve refused numerous requests to add caste as a Filter to muzmatch. Yes - can you believe that’s still a thing in 2020.

I know many Arabs/Asians have family members who will negatively judge someone of their own ethnicity for having dark skin. I know many who, for them, a ‘Black/African rishta’ is an immediate dead end. Just don’t even go there.

How quick are we to speak up and challenge these ideas and thoughts? How often have we said to our own parents - this mindset is wrong and I will not subscribe to it? This isn’t easy - these are ideas that have been ingrained across generations. But unless we actively open our eyes to it, be conscious of it, recognise it and question ourselves, this will never change. 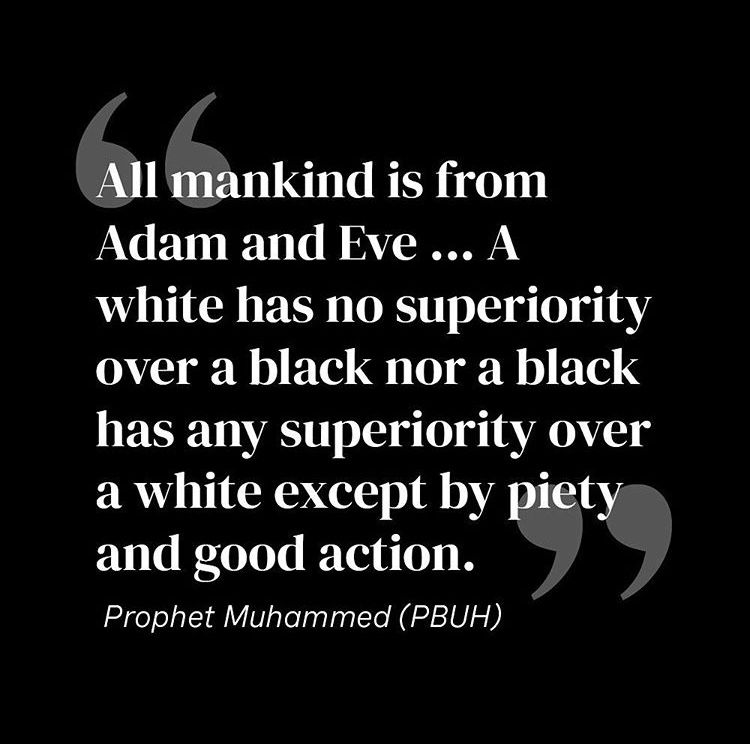 I remember when I first launched muzmatch, I was genuinely in awe of the large number of (mainly younger) interracial couples who were meeting and marrying on muzmatch. It positively surprised me, and gave me a warm and fuzzy feeling inside.

For them - finding a good Muslim that they were attracted to was all that mattered. It seemed a world away from the mindset of the 30+ year old singles I had met and how rigid they generally were in terms of finding someone “who must be Pakistani”. I was glad that we had played a small role in helping to bring them together and bridge these divides.

I still remember a couple who first matched via the Explore section of muzmatch - a section which ignores most of the Filters you may have set. “If it wasn’t for this feature, I would never have come across him as he was totally not what I was looking for”.

That isn’t to say there is anything wrong in wanting to find someone of your own background. There is plenty of evidence to show that familial similarities, language, culture, traditions, outlook and practises do contribute to relationship success and compatibility.

Our Prophet SAW said, in his last sermon:

When it comes to finding a partner - let’s consciously be open minded. Let’s focus on judging a potential spouse based on their piety and good action. Let us break these meaningless boundaries which have been created by generations before us. Let us speak up and challenge these outdated and backward views we KNOW are held in our communities.

For many years, in both our online, TV and offline ads, we have sought to normalise interracial marriages - particularly in ensuring we had strong Black representation. We sought to show Arabs/Asians and Black communities meeting, mixing and marrying. We’ve tried to challenge the age old stereotypes of the virtues of lighter skinned women in particular.

This is a very conscious decision. We’re fortunate to have such a large reach, and are able to bring up the topic of Muslim marriage in public spaces. It’s therefore imperative we do this right, and not in a manner which perpetuates the same old backward mentalities.

My appeal to this and the next generation is - be brave. Let’s achieve the real beauty of one Ummah. Let our peoples and tribes know each other.

What about on muzmatch?

It pained me to hear of some of our Black users mention that they had suffered racist discrimination on our platform and did not feel that appropraite action was taken.

We have a duty to raise these issues to our users, to educate our community and use our platform for good. We must do better to stamp out any racism that takes place on muzmatch. 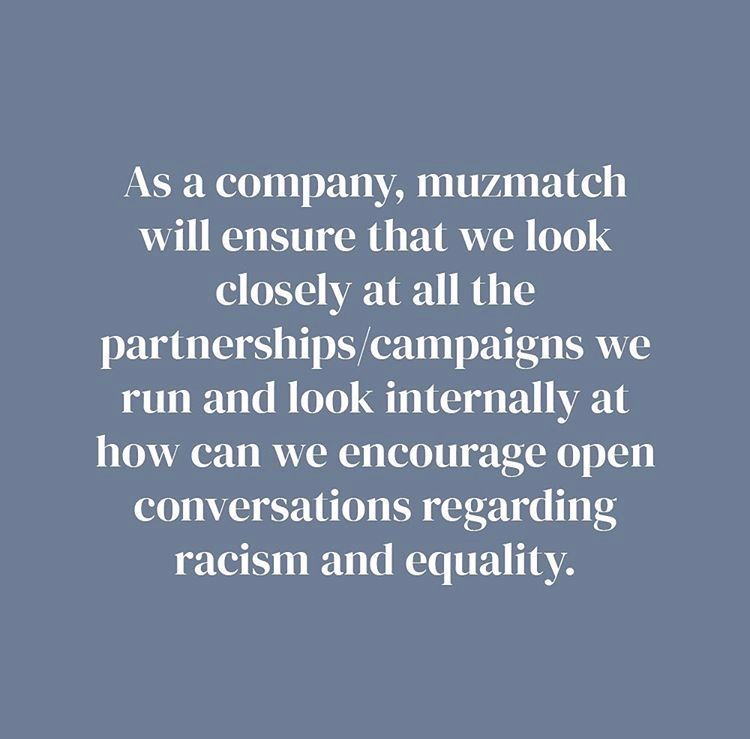 We have a zero tolerance attitude to racism on muzmatch. Any instances of anti-Black discrimination, or discrimination of any kind will result in your account being permanently blocked immediately. No warning. No excuses. It's not welcome here.

It’s on us to ensure we enforce this with consistency and vigour.

We are currently working on enhancing our behaviour policies on muzmatch, with more detailed principles of respect and good nature to be outlined, along with much tougher punishments.

We at muzmatch have a role to play in ensuring Black voices are heard. And we have a lot more to do.