Non Muslims Try Wearing A Hijab For A Day!

In a world where Islamophobia is on the rise, and wearing a headscarf and covering up is becoming more and more difficult, it is lovely to see that there are people out there that are still willing to learn about our religion.

I challenged some of my non Muslim friends to try on a Hijab for a day, as part of World Hijab Day. Read how their days went below.

Why is World Hijab Day so important? Unfortunately, hijabophobia is very real, and on a rise. Check out this blog for real life examples of our member’s experiences of hijabophobia. It is important we educate non Muslims about the hijab, to help spread awareness and hopefully reduce the discrimination Muslim women face because of a "piece of cloth" on their head.

“Why do Muslim girls wear hijab?”

It’s a valid question that many non Muslims may not understand the answer to, especially in an age where covering up seems to be seen as a sign of oppression. I’m sure we’ve all heard the comments and remarks about how we shouldn't have to cover up, and should be able to express ourselves. But for us, the hijab is the greatest form of us expressing our religious identity, and is super empowering. This is why World Hijab Day is so important.

The whole purpose of World Hijab Day is to encourage non Muslim women all over the world to try the hijab for a day, and see it from our perspective.

I first started wearing the hijab when I turned 13. At the time, I went to a Christian school and was worried about how people would react and what they would say, but Alhumdillallah I had an amazing group of friends who never made me feel different or left out. This World Hijab Day I challenged them to try on the hijab for a day and record their experiences, here is how it went: 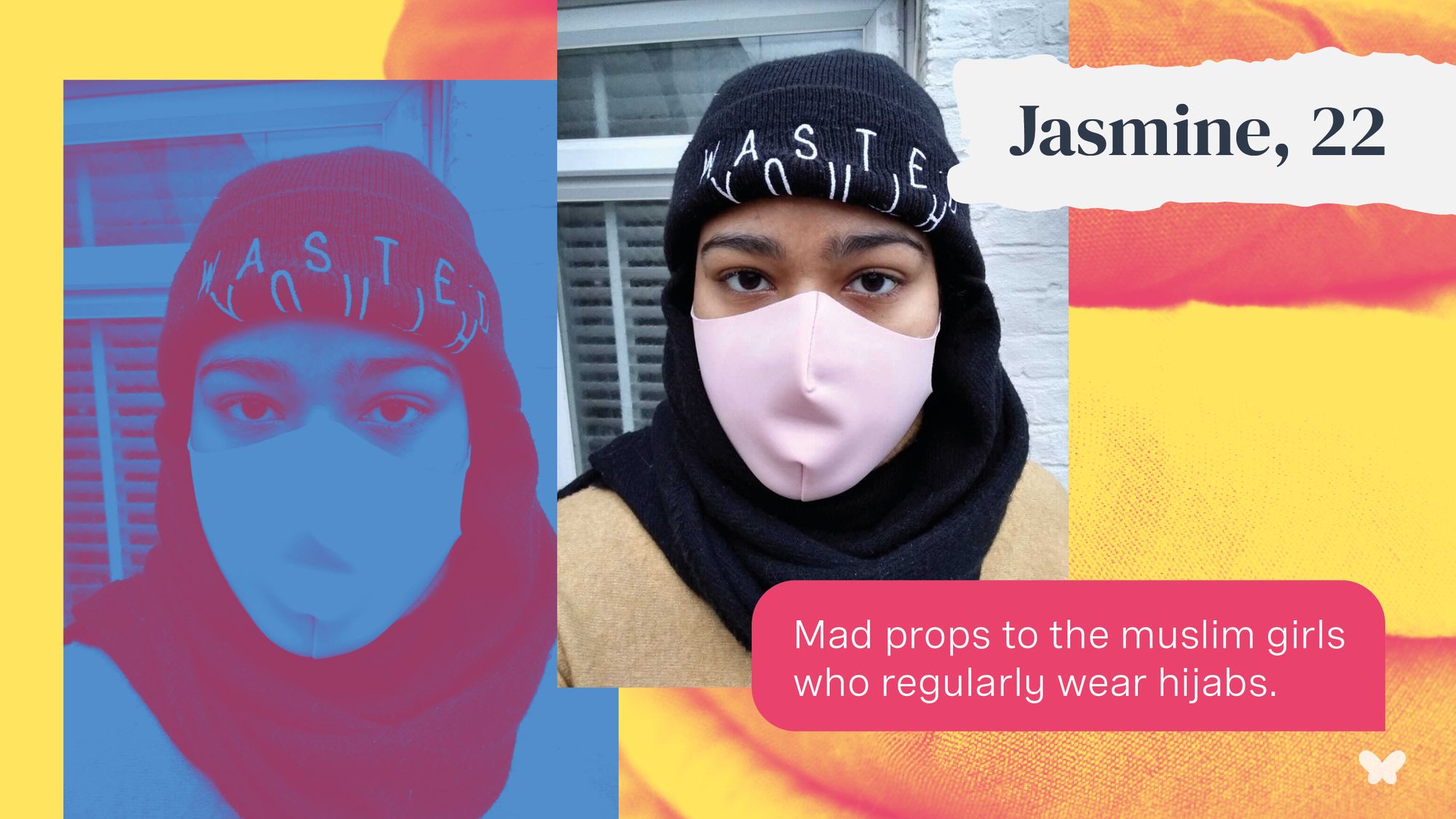 “Before starting, I was most worried about running into someone I knew and them interpreting my wearing of a scarf as being disrespectful despite my intentions. Now, having worn the hijab for a day, I believe it gave me some added perspective.

Given that we're in a lockdown, I only left the house for around 20 minutes, to pick up some food. I don't think there was a particularly different response considering I live in a diverse area. Maybe one man I passed made a point to stare at me but, to be fair, I stared back! I found my reaction to be the thing that changed the most: where I would usually make a point to make eye contact with those similar to me (women and people of colour mostly), I found myself seeking more validation from hijabis than I usually would.

The experience taught me just how much adjustment and energy goes into maintaining a hijab. I was only outside for a short time yet I could feel my scarf moving in ways that I was afraid would expose my hair. I felt a sense of responsibility not to expose myself, given the situation, almost like I was representing hijabis everywhere.

In the future, I think I would be happy to wear a scarf again, in London. It's one of the more accepting locations in the UK. Considering that I already get enough suspicious looks as a BAME member, I don't think I would feel as comfortable wearing a hijab outside of London. Having attended a university with an overwhelmingly Caucasian population, where acts of newsworthy racism were a yearly occurrence, I can only imagine how it would have been to move through that space with a hijab on too.

Mad props to the muslim girls who regularly wear hijabs, they have so much more dedication than I have ever had. And, when it's cold (which it is) they also have the added perk of never getting cold ears!” 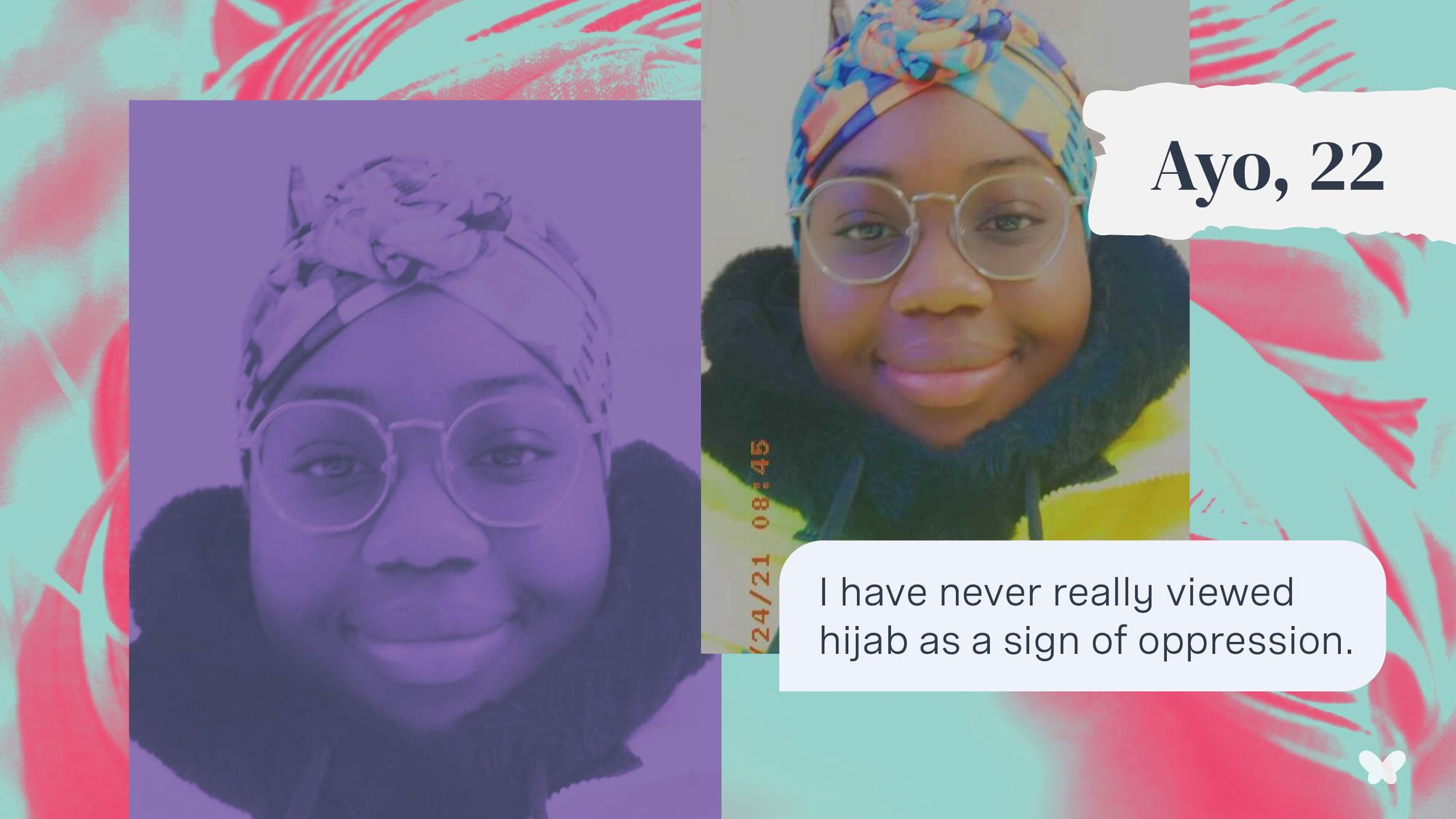 “Being a black woman I often cover my hair, especially now that we’re in winter and the cold can be damaging to it (also it keeps me warm), however I don’t usually cover my body completely, e.g. arms, neck, ears. Today I covered up as much as possible for World Hijab Day.

The day went as normal. I went to work and did not experience anything out of the usual, but I do work outdoors in a covid test centre so I have to be covered all the time, so I’m not sure if anyone would have noticed anything different. I am the only one at my job who may be seen as covering their hair for religious reasons, but others do wear hats.

I could continue wearing a hijab on a regular basis as I was not treated differently, and my ears were warm. I have never really viewed hijab as a sign of oppression. I think if Muslim girls wear it once and then continue wearing it, it is their choice. Whatever makes them feel more comfortable and closer to God is good for them.” 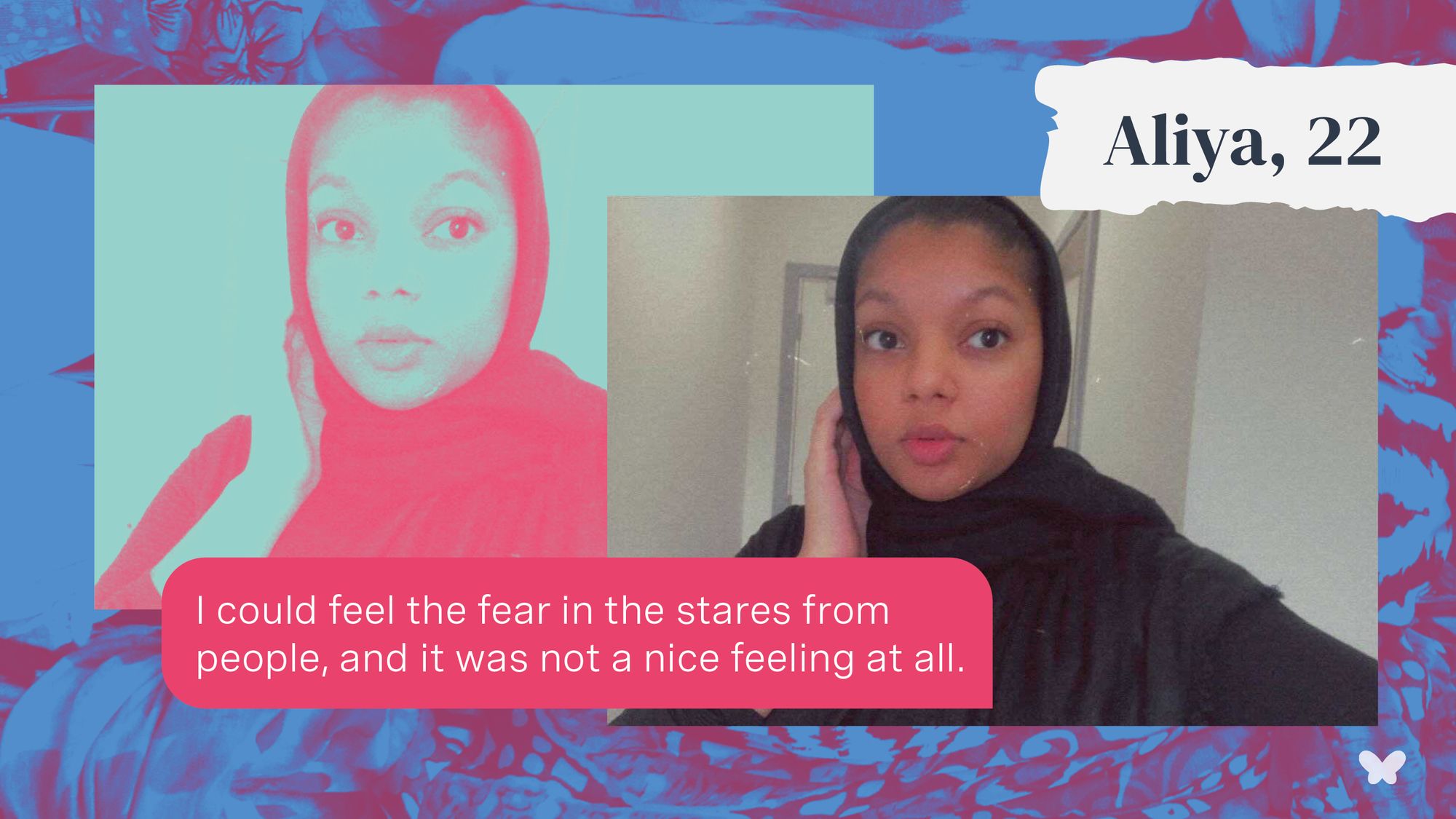 “In celebration of World Hijab Day on February 1st, I wanted to take part and experience wearing the hijab for a day. I have friends who wear the Hijab and so when I was invited to take part in the celebration, I thought it the perfect opportunity to embrace a significant part of their religion.

I was a little bit nervous to go out wearing a hijab as I did not want anybody to feel as though I was wearing the hijab randomly or to make fun of women who do wear it, as friends and family are aware, I don’t wear one but then I reminded myself of the reason that I was wearing the hijab for the day and ultimately, I wore it to celebrate hijab wearing.

During the day, I visited a friend, and stopped off at Co-op and Tesco. Whilst out, I did get a few looks of concern, disgust, and I noticed people subtly distancing themselves from me on the pavement. Yes, I know we are supposed to keep 2 metres apart, but it was very noticeable as they would look me up and down and purposely walk further away. Inside co-op, people did look up when I walked in, however the cashier did not give any reaction really, which was good.

My friend did not even notice I was wearing a hijab when I met him outside of Tesco which was quite surprising, but I guess as we all know, men are oblivious to everything lol. In Tesco, I did get some stares as hijabi’s in Colchester are a rare sighting, being the oldest town in England and a predominantly Caucasian area, most of the people belonging to ethnic minority communities are university students, and even then, there aren’t many students wearing hijabs. I felt disheartened that people were looking at me strangely up and down, as the only thing I had changed about myself was that I was wearing a headscarf. I could feel the fear in the stares from people, and it was not a nice feeling at all. On the whole though, my friends were very supportive, it is however sad that there are people out there who are not willing to accept and understand the reasons that women may wear a hijab and respect them.

One thing I definitely learned is that it takes great courage to wear a hijab and I realised even more how beautiful they are. Another thing I noticed was the maintenance it takes whilst wearing a hijab; especially as nowadays mask wearing is essential, trying to put on a mask and not show my ears and taking it off, or something as simple as putting in earphones, all while wearing a headscarf; it did stress me out a little bit. My friends who wear hijabs make it look so graceful when we are out and about and they are fixing their scarves and doing these simple tasks. This experience definitely allowed me to experience some of the things that hijabi’s face on a daily basis and I really would encourage more women (and men) in celebrating World Hijab Day, appreciating and educating oneself about the wearing of a hijab. I have so much respect for Muslim women who decide to wear one, and this experience only furthered my respect for them." 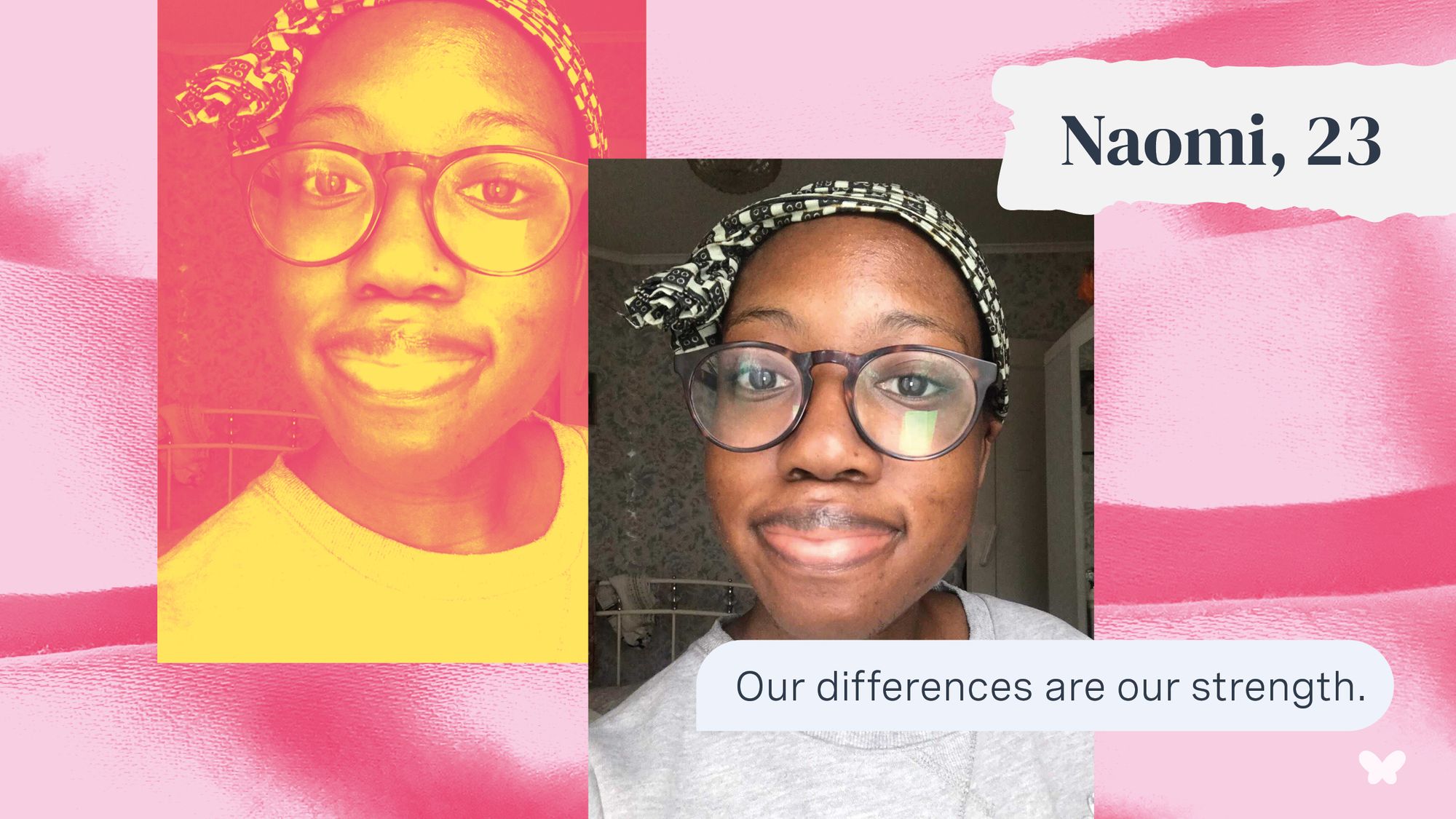 “This week, I wore a hijab for 24 hours in aid of World Hijab Day (which takes place on the 1st Feb 2021). In the morning, my mum wrapped fabric around my head, and I was pleasantly surprised by how it looked. I instantly thought about how fun it would be to match my scarf colour with my outfits, just like I do with my scrunchies on a regular basis. I had a couple of Zoom meetings that day, and I felt a moment of anxiety at the questions that could be asked, but I was met with compliments instead! I think an important lesson for others is that modesty can be empowering for some women, and we shouldn’t try to enforce our own thoughts and beliefs onto others if we don’t feel the same way. Our differences are our strength. I definitely have a lot of respect for Muslim women who wear a hijab regularly because to me, it seems like such a brave way to observe your faith, especially given the rise in Islamophobia across the world.”


In a world where Islamophobia is on the rise, and wearing a headscarf and covering up is becoming more and more difficult, it is lovely to see that there are people out there that are still willing to learn about and understand our religion. But it’s also important to be cautious, as hijabophobia is unfortunately very real, check out this blog for real life examples of our member’s experiences of hijabophobia.

This blog was written by Sara Abdul-Hameed 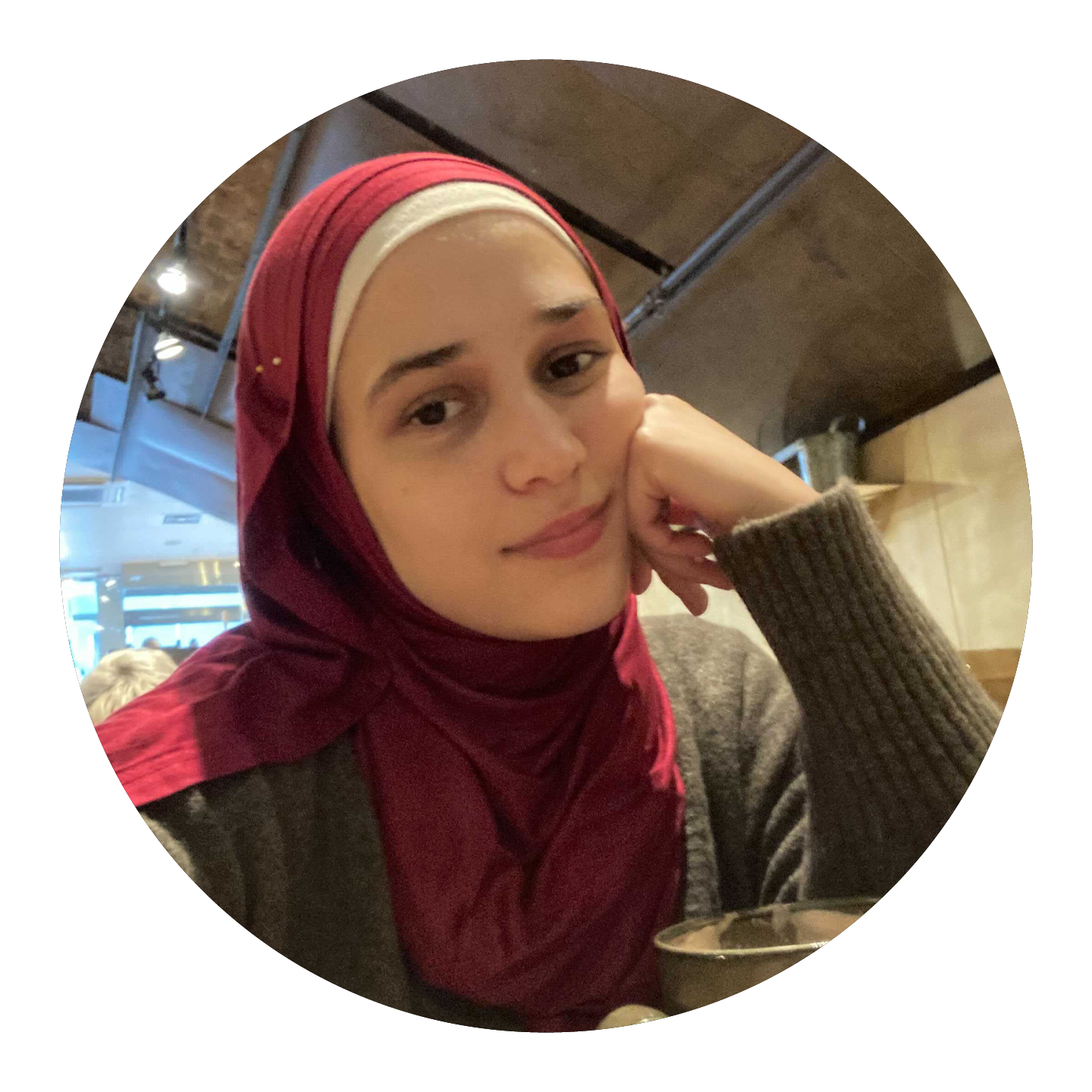