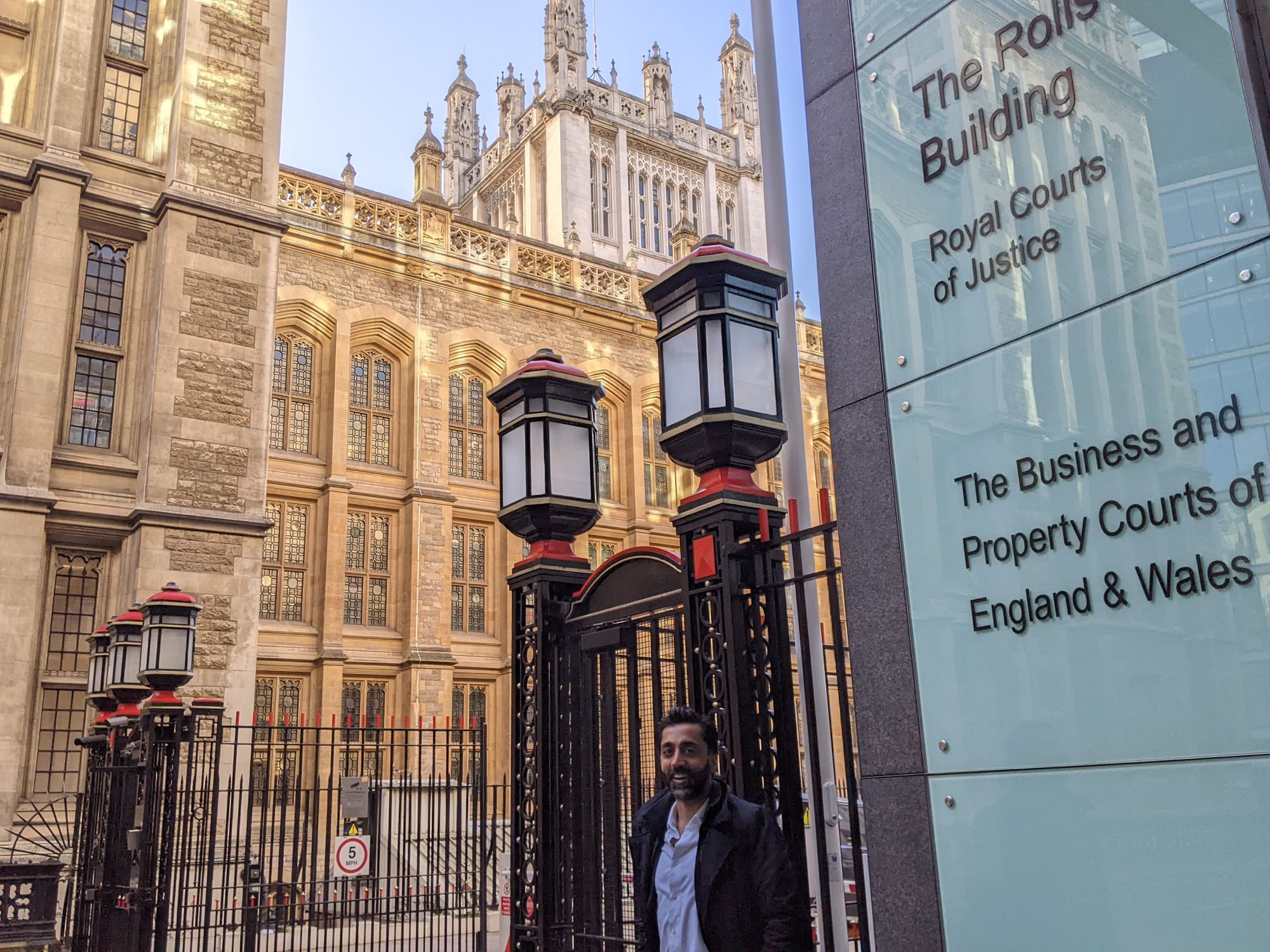 For background on the case and how we got here, read our previous post on the lawsuit: https://muzmatch.com/en-GB/blog/muzmatch/were-getting-sued

Judge Caddick QC will submit his judgement in 6 weeks.

During the trial I was cross examined for nearly 3 hours. 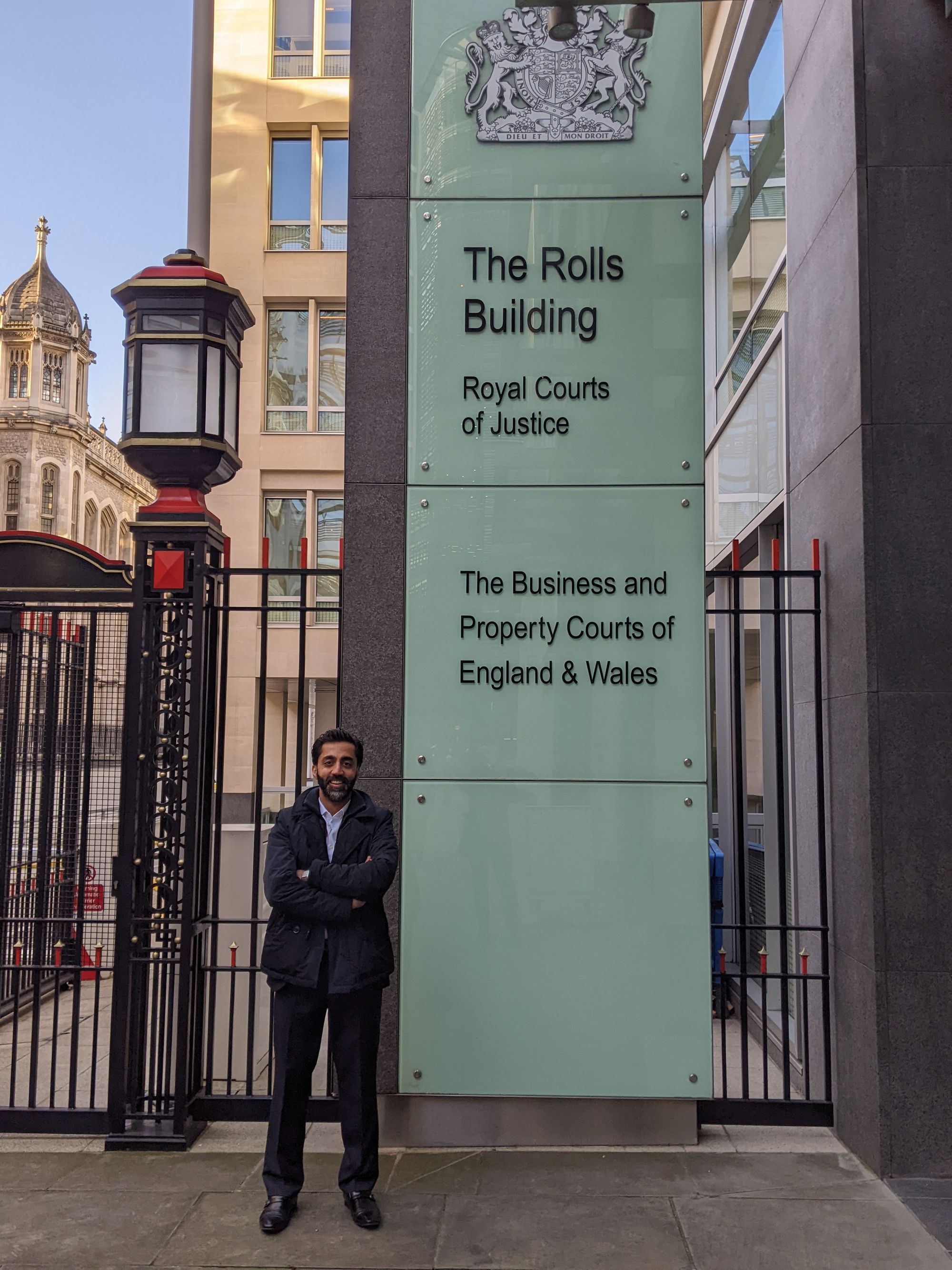 Cases at the IPEC are 2 day trials - Day 1 involved 2 witnesses to be cross examined by either side, Day 2 with closing arguments by both sides for half a day each. Alex Lubot (CEO Match Group EMEA-APAC) and Jerome Riviere (Match/Meetic Brand VP) were put forward by Match Group.

Myself and my previous boss at Morgan Stanley were put forward by ourselves.

During the trial I was cross examined for nearly 3 hours. In essence, I defended our motives, our design changes and our reason for existing and firmly corrected their barristers accusations against me and my conduct.

Calm, firm and direct was how I wanted to handle myself. I always say, it's easy taking the stand if you're telling the truth. The truth is easy to remember. We had nothing to hide and just wanted to be heard fairly.

The trial began with Judge Caddick commenting that for a 2 day trial, there was far too many exhibit and evidence bundles. Match Group even added to this by filing NEW evidence on the day of the trial. Turns out a simple case is not simple after all. 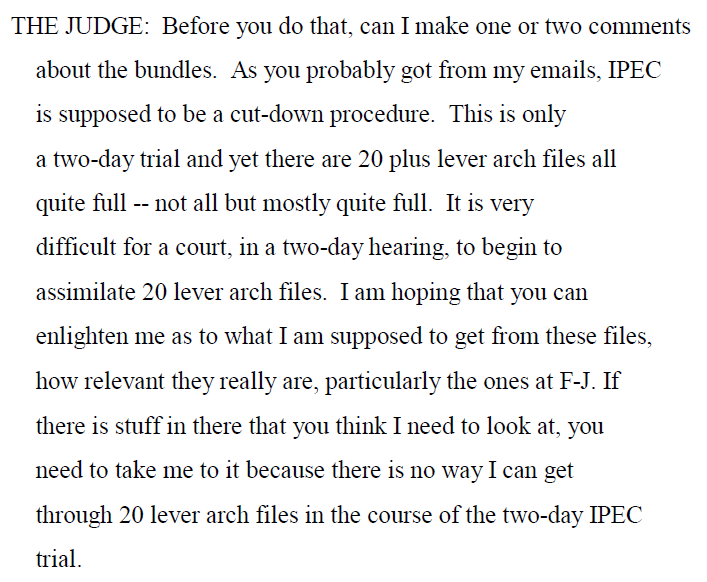 The fundamental premise of the case, is that Match Group allege that use of the word match is distinctive of Match Group/Match.com and is not, an english descriptive word. Hence as a global corporation they wish to lay claim to the word match in the field of dating.

Interestingly for all their talk of us riding the match brand to further muzmatch, when they acquired a competitor and rebranded it, they did not leverage the Match brand in the new name. Why? Because they know it isn't helpful in the Muslim market. 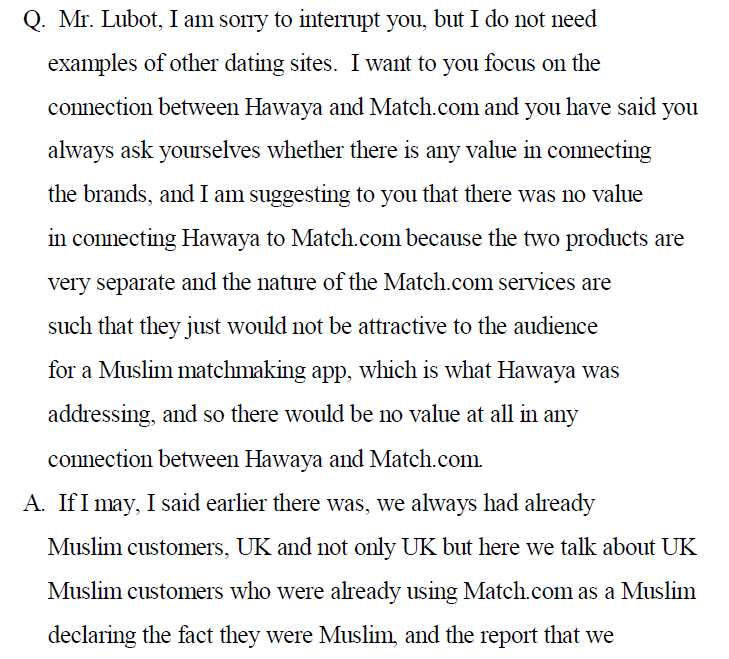 Their own evidence showed only 15,000 Muslims joined Match.com in 2018. We had hundreds of thousands of Muslims joining muzmatch that year.

They and we had searched over 50 MILLION records for any instances of confusion between muzmatch and match.com. None were found. Customers clearly know the distinction and do not make the link, yet Match Group wished to suggest any dating company with the word match would be linked to them.

A side satellite issue which Match Group tried to really exploit was use of the word Tinder on a handful of SEO landing pages (out of 5000+ different SEO pages) on our website and on early social media in 2015. Our posts always commented explicitly on why we were NOT like Tinder. Such pages yielded v little traffic and we ripped our SEO pages out in 2020.

It is important to note, @muzmatch used muzmatch with a heart on the top of the trailing h since 2011. Many years before Match Group ever used such a design and indeed they only registered a design mark for match (with heart) in 2015. Yet Match Group claimed we were infringing on their brand in 2016 with use of the heart and font.

Extracts from their particulars of claim really do make me scratch my head - compare these logos yourself. 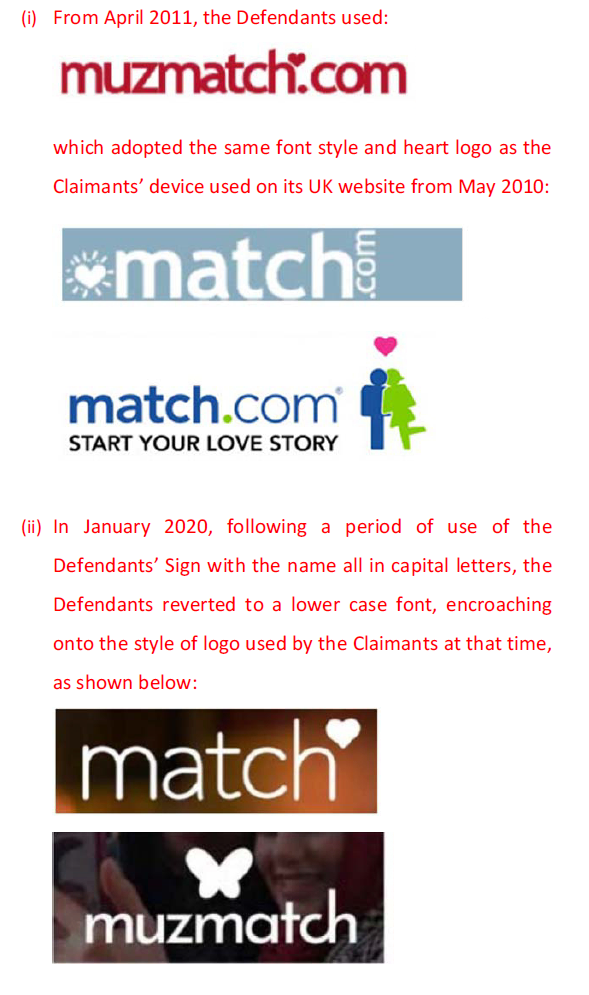 What they cleverly attempted to manouvere around was a conversation that took place Without Prejudice, but then was introduced into the trial in closing args. In short - in 2016 Match Group said they would 'tolerate' the use of the muzmatch brand as long as we made changes to the logo to be approved by them.

After some back and forth we agreed to capitalise MUZMATCH and not use a heart device at all (we have now had a butterfly logo since 2016). They approved the new brand.

Match Group then proposed a settlement/coexistence agreement, which interestingly would only stand as long as we DID NOT SELL MUZMATCH TO A COMPETITOR. I flatly refused - and said happy to sign the agreement if they took that clause out. They refused and the agreement died.

Despite this we maintained the brand design changes agreed by Match Group for over 2 years. Again - we had zero interest in anyone getting us confused with match.com - it does not help our business if they were.

During our 2019 brand evolution, we submitted evidence showing conversations between myself and our designers explicitly making great pains to make changes to our logo to not give room to be confused with match.com (different t, joined ch and no use of any heart).None of this was challenged in my cross examination.

Below are just some extracts from my 3 hour cross examination 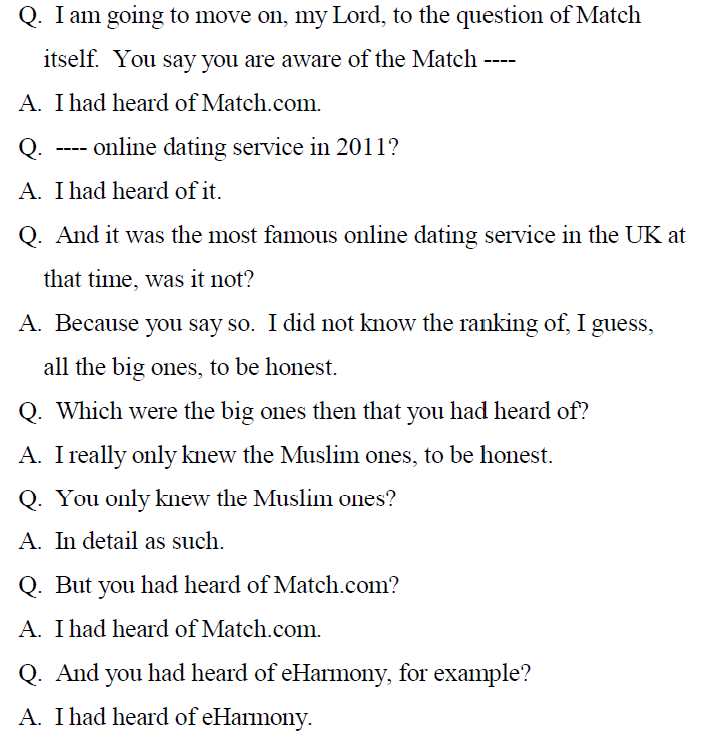 Match Group attempted to use old surveys done in 2012 to show that customers referered to them as Match, despite survey results actually showing participants referring to Match.com as the brand.

Note how often I have to correct their barrister that the references are not match and are Match.com 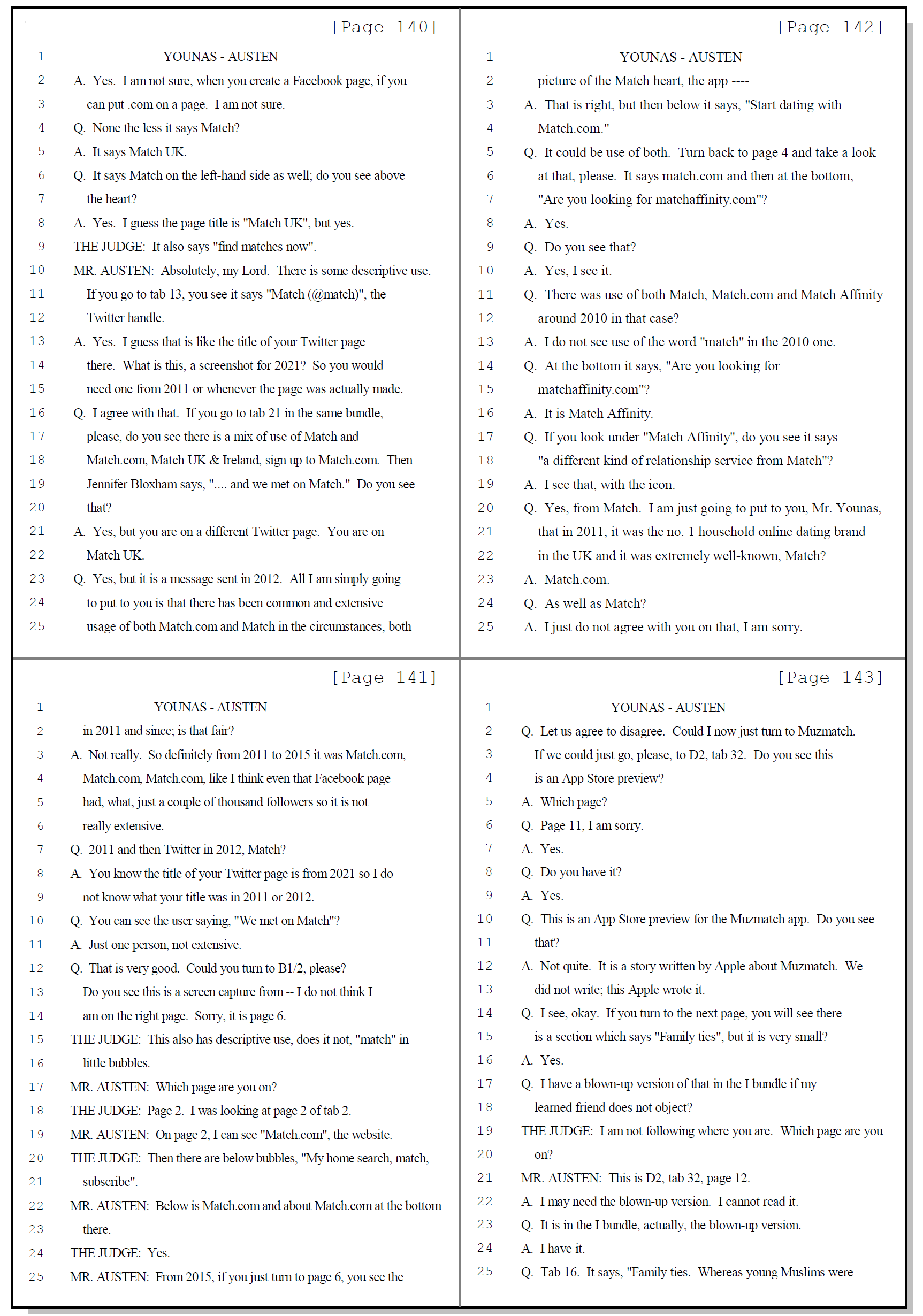 Having to explain the obvious - that the muzmatch and match.com logos did not remotely look similar. 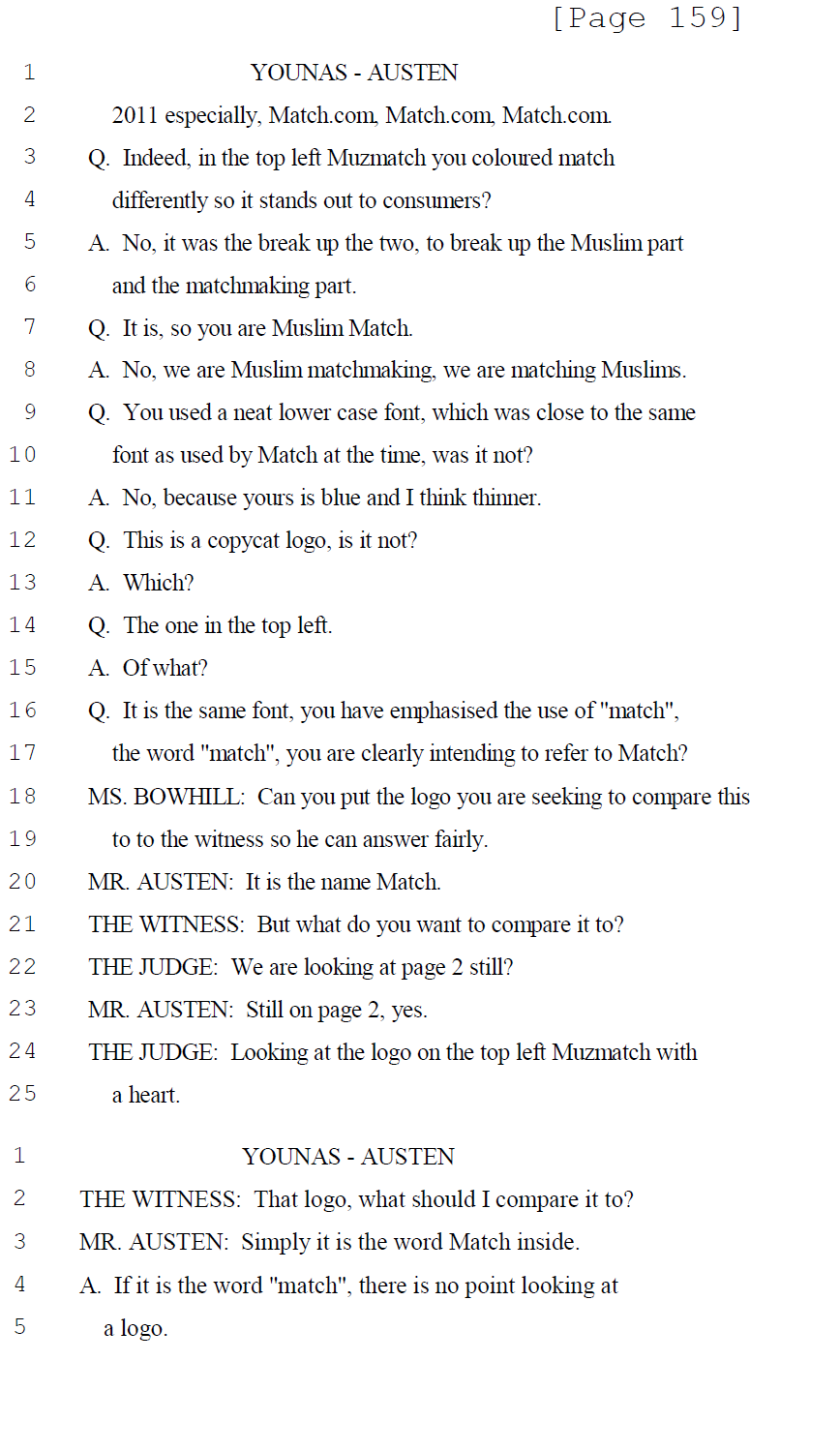 My request to Match Group to drop their TM opposition to us during acquisition talks being refused. 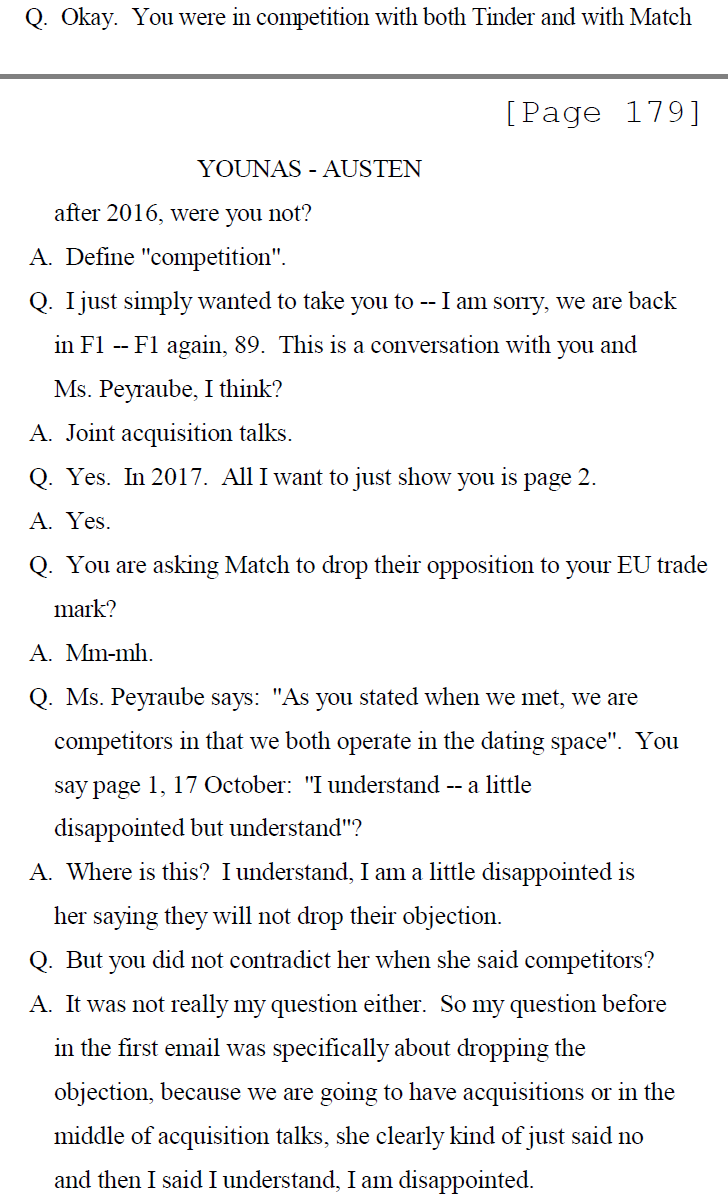 Me having to state repeatedly that disclosures showed customers did not refer to them as Match, but repeatedly as Match.com - as late as 2018 this was still the case.

They attempted to say that due to a minority of members who misuse muzmatch, the service is haram and hence no different to Match.com. Flatly incorrect - such behavior is not tolerated on @muzmatch and will result in a ban. On mainstream services, that bar is much much lower. 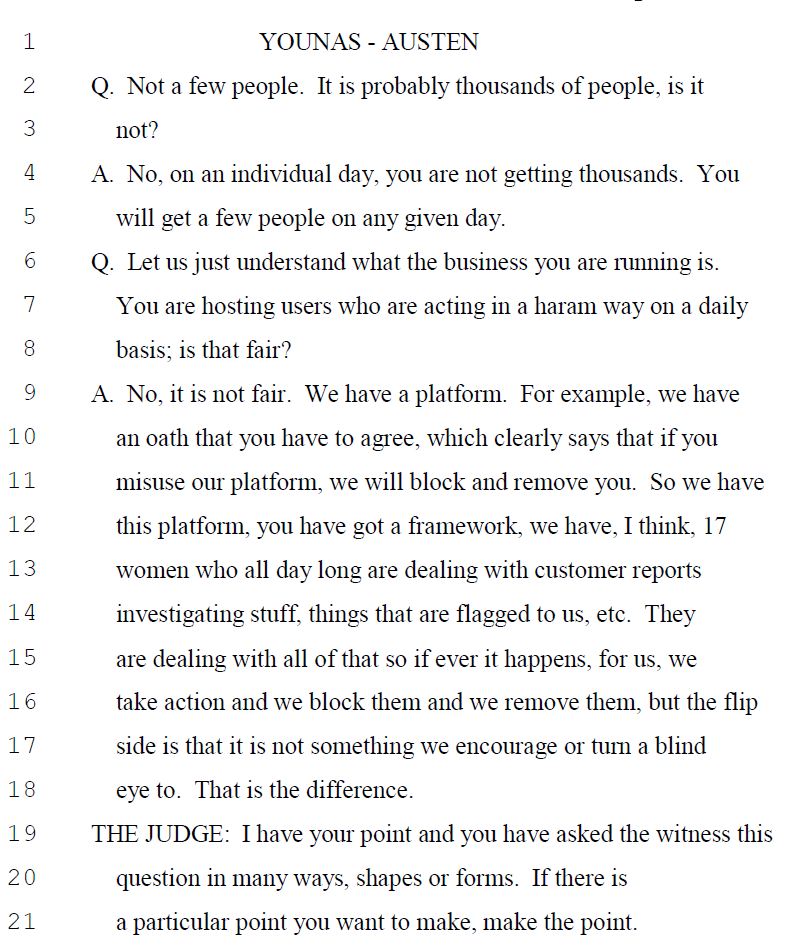 They introduced new evidence - my original thread discussing this case as evidence on the day of the trial. Yes - this needless litigation is absurd. 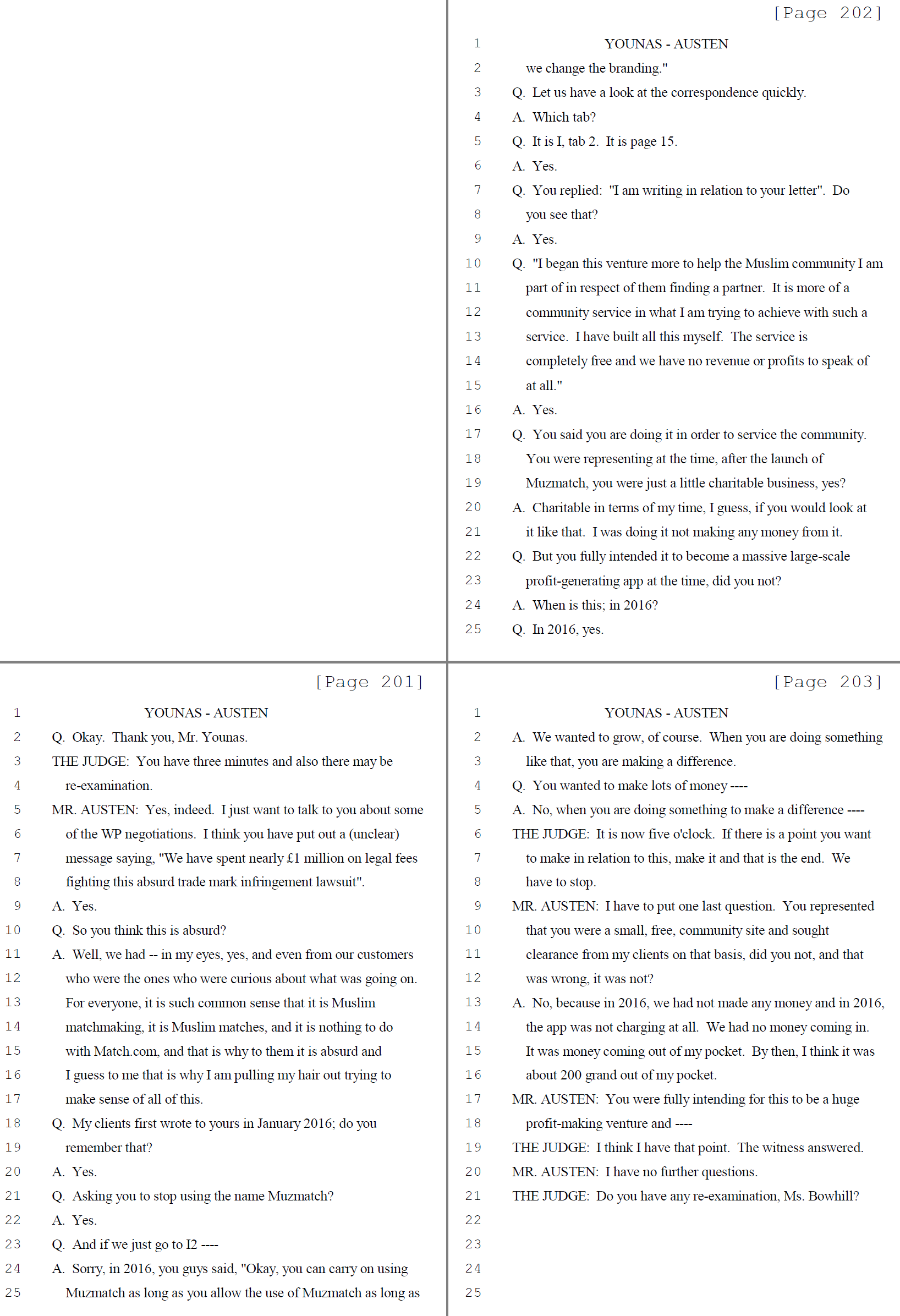 Crucially it was pointed out that if match was distinctive of match.com why did they never register that as a trademark? In short - they know they would not be successful for a commonly used English descriptive word. 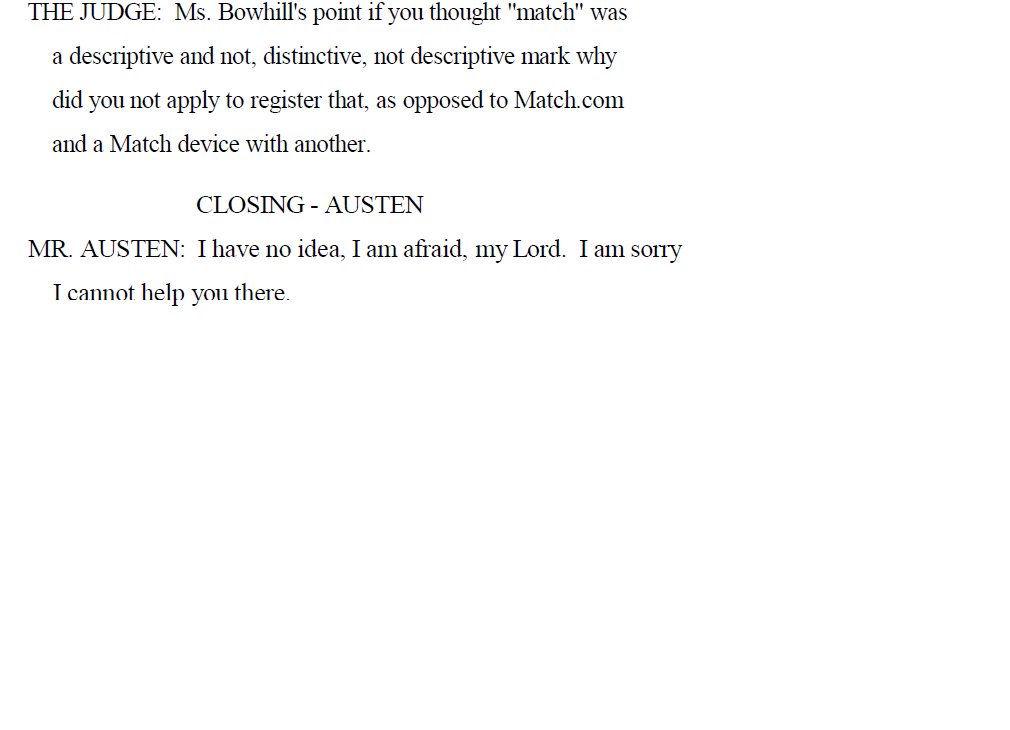 Despite @muzmatch clearly serving Muslims seeking an Islamic marriage, Match Group attempted to say that was not the case. 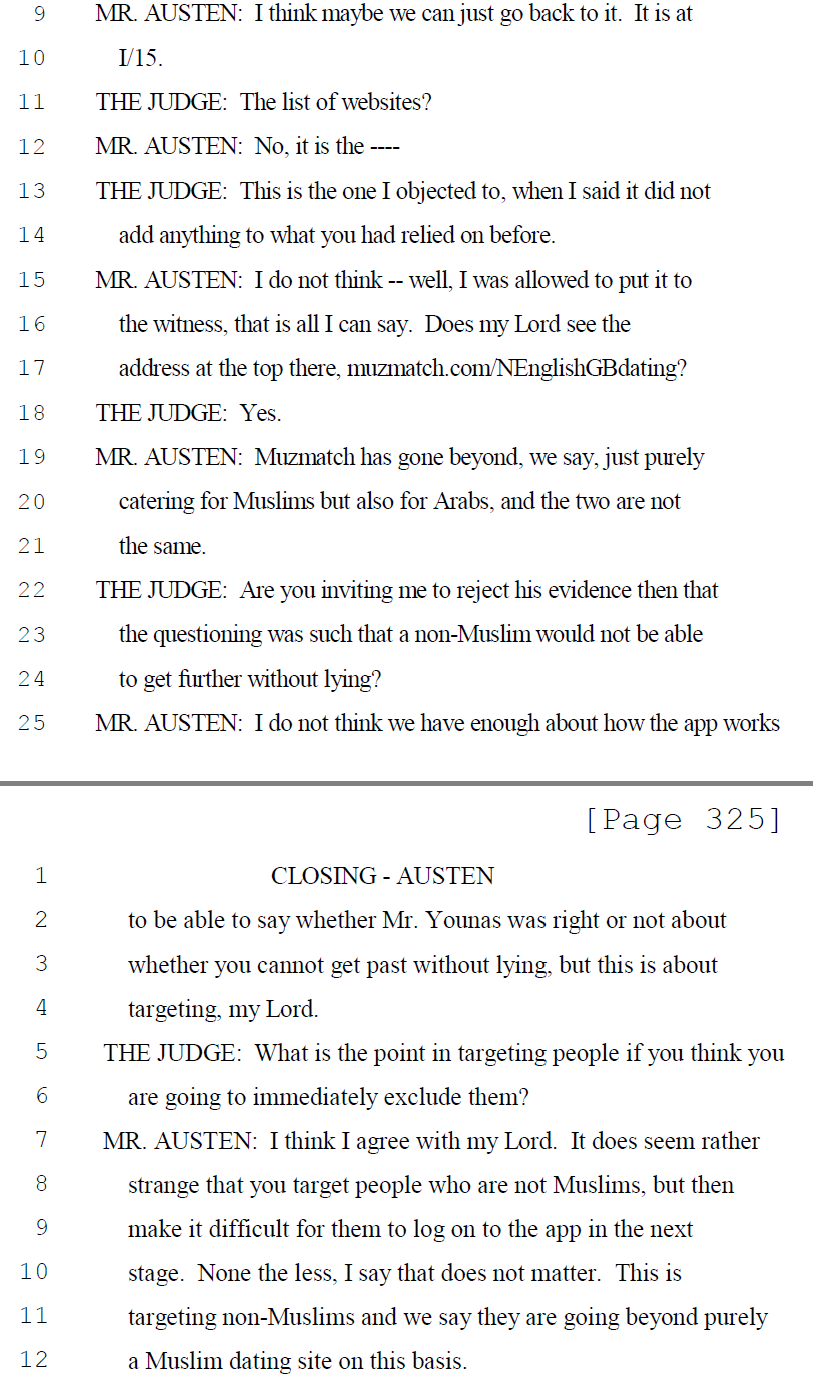 The origination of the name muzmatch, and why did Match Group not use Match branding in their Muslim competitor they acquired if they felt such 'passing off' gave us a huge advantage? 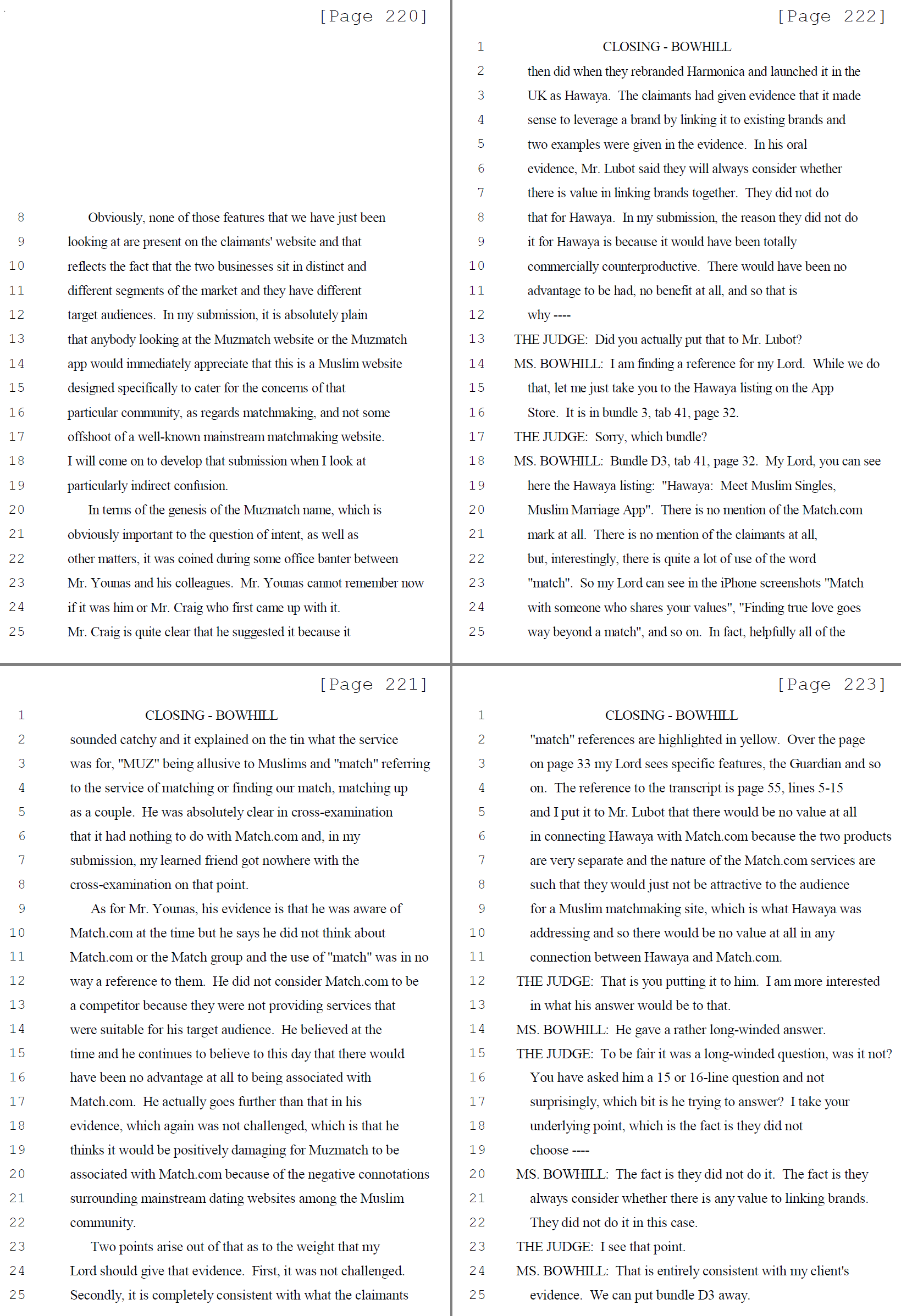 Their brand surveys referred to Match.com - not match. 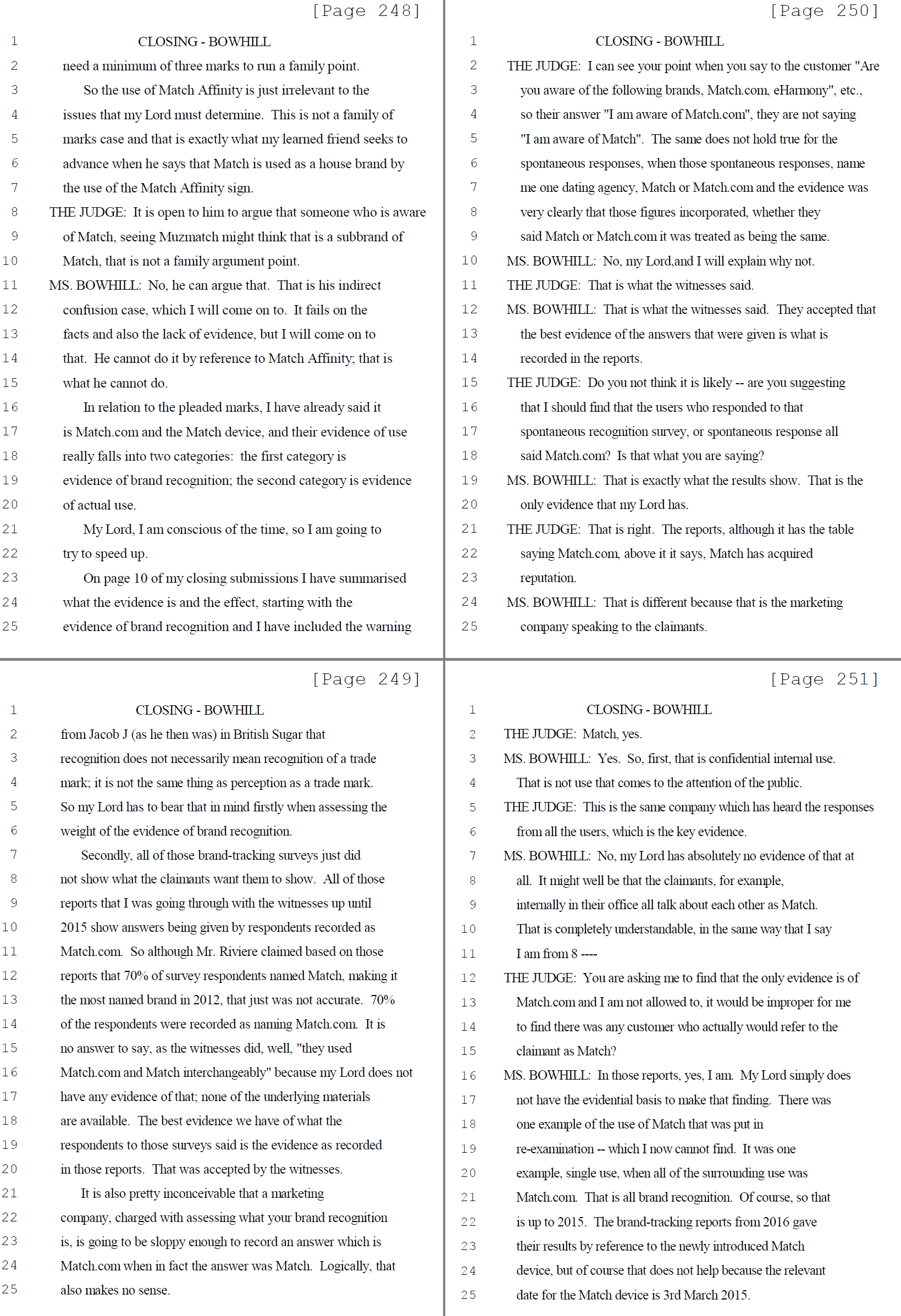 Full credit to our legal team, Jessie Bowhill (Barrister), and Jeremy/Marc/Roosa/Sam at Bristows - its been well over a year putting our case together and working on it night and day. Litigation definitely takes it out of you and is hugely stressful, expensive and distracting. 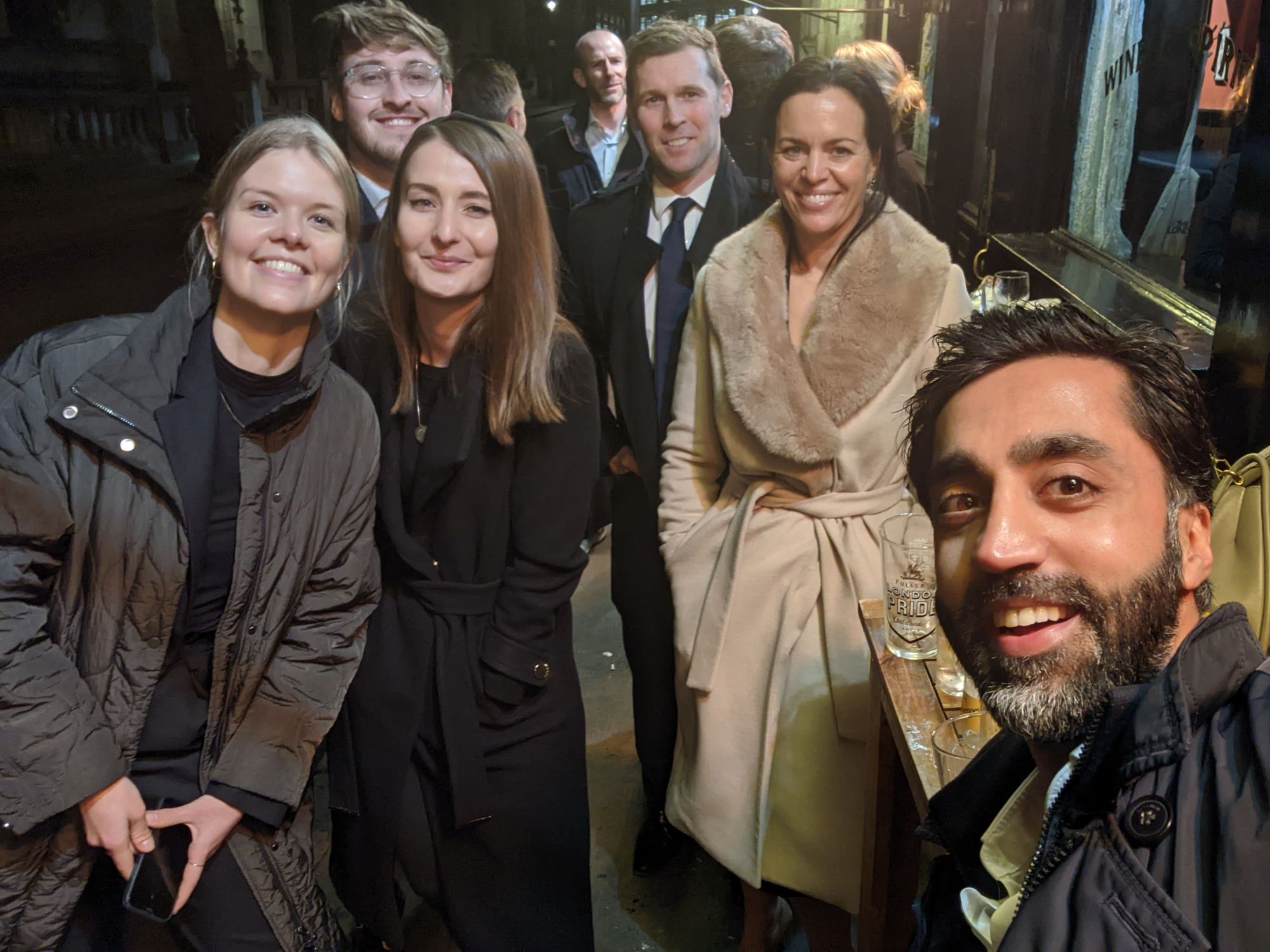 Key for us was to ensure we had no regrets - that we put a well formed and detailed thorough case forward in an organised fashion. We await judgement now in 6 weeks - whatever happens, no question @muzmatch will come out of it stronger.